Home » 21 new species of the genus Baldorhynchus discovered on the Prealps!

21 new species of the genus Baldorhynchus discovered on the Prealps! 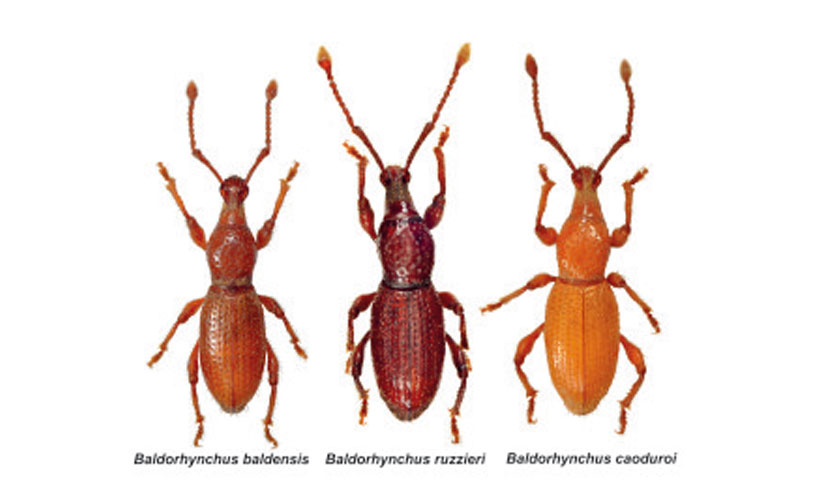 30 Jan 21 new species of the genus Baldorhynchus discovered on the Prealps!

The field investigations of the WBA are not limited to the biodiversity hot spots all over the world (during 2015 our members were in Greece and Bolivia), but they are oriented also to the study of the flora and fauna of Italy. Last January 27th our members Cesare Bellò, Giuseppe Osella and Cosimo Baviera (who is researcher to the Department of Animal Biology of the University of Messina), published on the international review ZOOTAXA (4070 (1): 001-101; 2016) the work “A taxonomic revision of the genus Baldorhynchus (Di Marco & Osella, 2002) stat. n. (Coleoptera, Curculionidae, Entiminae)”. It is a very important work that describes 21 new species of the genus Baldorhynchus that has been elevated from subgenus of Otiorhynchus to new genus. The insects of the genus Baldorhynchus are blind Coleoptera Curculionidae, living in the subsoil of the prealpine calcareous reliefs from Lombardia (Val Brembana) to Southern Trentino and Veneto (Piave River). The name of the genus is referred to Monte Baldo, a wonderful mountain chain over the eastern coast of Garda Lake.
During the investigations about 300 caves were visited; in 88 of them specimens (or remains) of Baldorhynchuswere collected. The insects have been collected not only in caves but also in old mines, under deeply buried stones or sifting wet soil litter of Fagus forests. The specimens coming from Monti Lessini were collected using endogean pitfall traps in deep soil (MSS) created by naturalists of the WBA (see “The subterranean environment” by P.M. Giachino and D. Vailati, 2010). The specimens from Monte Grappa have been found in old war galleries under stones.
Besides the description of the new species the work includes the revision of the species already known and the elevation from subspecies to species of several forms. Today, the species referred to the genus Baldorhynchusare 37. The work includes also the keys to species, a complete checklist, diagnosis, distribution maps and informations about ecology of the species.
Our Association for many years supported the naturalistic researches in the Mediterranean basin through a specific research project (Research Missions in the Mediterranean Basin), that until now brought to the discovery of hundreds of new species for science. Therefore, WBA wants to express sincere congratulations to the authors for the new discoveries in an area considered among the richest in biodiversity all over Europe.
The persons concerned can ask for a PDF copy of the paper directly to our member Bellò to the following e-mail address: cesarebello@ortoveneto.it