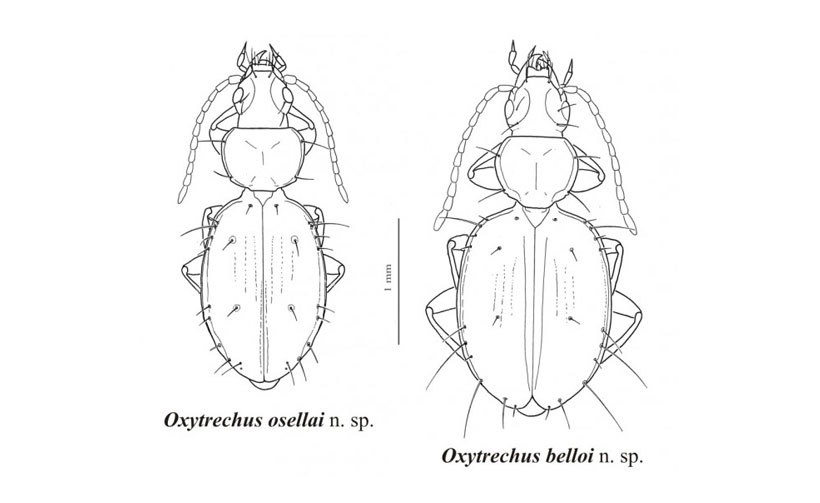 Our members Pier Mauro Giachino, Gianni Allegro and Cosimo Baviera published on the review Zootaxa (3895(1): 144–150; 2014) the issue “Two new species of Oxytrechus Jeannel, 1927 from Ecuador (Coleoptera, Carabidae)”. It is the XVI contribution of the WBA Program “Biological Research in Central and South America”. In the work two new species of Coleoptera Carabidae of the genus Oxytrechus Jeannel, 1927 are described: Oxytrechus osellai and Oxytrechus belloi collected by our members Giuseppe Osella e Cesare Bellò from the paramos of the Ecuadorian Andes during the expedition organized by WBA “Ecuador 2008”. O. osellai n. sp. comes from Cangahua at 3375 m a.s.l. and O. belloi n. sp. from Paso de la Virgen at 3515 m a.s.l. The drawings of the habitus and aedeagus of the new species together with the phothos of their locus typicus are also given. Holotypes and paratypes of the new species are deposited in the Zoology Museum of the Pontíficia Universidad Católica del Ecuador, Quito, and in the private collections of the authors and Paul Moret, Toulouse (France). The complete revision of the group of Oxytrechus will be the object of a new contribution concerning all the Ecuadorian species, which is currently at an advanced stage of drafting (Giachino, Allegro, Moret).
WBA in the last decade supported several naturalistic investigations of their members in South America; they discovered and described thousands new species and, for this reason, WBA expresses sincere congratulations to the authors and undertakes to continue keep the support to investigate the biodiversity hotspots in South America and all over the world.
The persons concerned can ask for a PDF copy of the paper directly to our member Giachino to the following e-mail address: piermauro.giachino@regione.piemonte.it