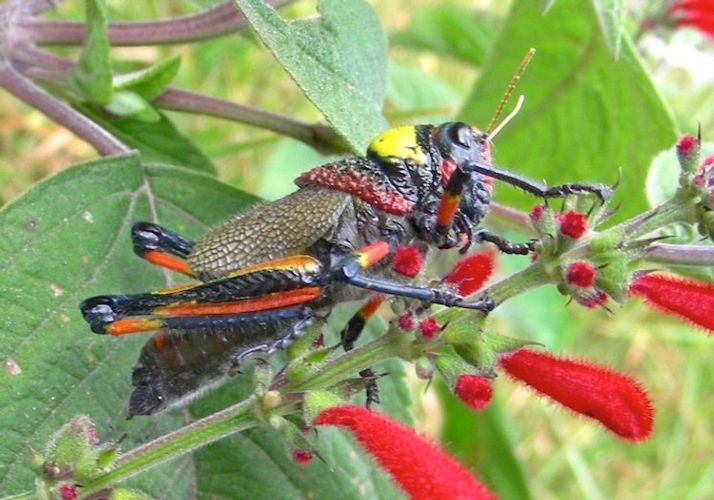 During a recent orthopterological expedition to Mexico, organized by World Biodiversity Association, Università of Central Florida and Edmund Mach Foundation a new genus of grasshopper of the Acrididi (Melanoplinae) Family has been discovered in the Southern area of the Sierra Madre del Sur (Oaxaca State). The new genus and species has been described by our President Paolo Fontana, Derek A. Woller, Ricardo Mariño  Pérez and Hojun Song on the internationa review Zootaxa in a work titled: “Studies in Mexican Grasshoppers: Liladownsia fraile, a new genus and species of Dactylotini (Acrididae: Melanoplinae) and an updated molecular phylogeny of Melanoplinae”. The importance of this new species derives from its limited geographical distribution and its ecological needs. In fact it lives at the margin of oak and pine woods, where it feeds on Salvia elegans (Pineapple Salvia), rich in essential oils which could give to the grasshopper a sort of  protection and explain the intense coloration, often a signal of toxicity for the predators. The DNA study of  Liladownsia fraile permitted to understand the relations among different genera of Mexican grasshoppers and related speciation mechanisms. The new genus, which has the scientific name Liladownsia, has been dedicated to the mexican singer Lila Downs, who was born in the Oaxaca State. Lila Downs is an international artist, Grammy Award-winner, which incorporates several indigenous tongues from Mexico into her musical style, including Mixteco and Zapoteco, wearing traditional Mexican clothing during her exhibitions. The authors of this new genus want to pay homage to this great artist and, through her, to the nature and culture of Mexico, both extraordinary and characterized by a great biodiversity, wealth and originality. The specific name of the new species is fraile, meaning “friar” in Spanish language; this is the common name of the species used by the inhabitants of the area of San Josè del Pacifico. Therefore, to date, the species was unknown to science, but it was well known by the inhabitants of the region where the species lives. Since the zone of San Josè del Pacifico is characterized by intense tourism and agricultural activities, the natural environments in which Liladownsia fraile lives are seriously threatened; for this reason the new species has been immediately inserted in the Red List of the IUCN (International Union for Conservation of Nature), to promote its conservation as a threatened species.
We deserve our warm congratulations to our member Paolo Fontana, new WBA President, for having discovered and described the new genus.